I’ve disabled my Spearmint game server (saturn.clover.moe) to reduce expenses. I expect to re-enable it in a few months. There is currently still another Spearmint server running. The master servers hosted by ioquake3.org and deathmask.net continue to be available.

The Magical Clover Forum (Discourse software, forum.clover.moe) is now archived. It’s not the prettiest or most accurate but the post content continues to be available. It’s was downloaded using “httrack https://forum.clover.moe”.

I’m planning to replace forum.clover.moe with a read-only archive in the future due to inactivity and hosting costs.

The following websites have a new address. The domain names should redirect to the new location until they expire. I don’t plan to renew the domain names. (spearmint.pw should become a redirect in the next two days when the DNS updates.)

For reference, clover.moe was registered on March 24 2016. I probably would not have registered the others if I had an actual main domain name instead of ztm.x10host.com. Having many domain names is kind of an unnecessary expense.

The following redirects are going to be removed after March 24 2018. Might as well break all links at once.

spearmint.pw meant Spearmint Powered. It was inspired on the Powered by Quake III logo featured on some game cases. The idea was that if someone made a game based on Spearmint, they link to Spearmint.Pw. I never got around to making a parody logo for it though. Also, Hatsune Miku on the Spearmint website since 2014 is a place holder for Clover who I have yet to actually design.

I added a page for my flexible hud mod for ioquake3 so it’s easier to locate than linking to a pk3 on Google Drive.

I made some minor long overdue changes to the Turtle Arena website. I rewrote the front page summary and modified the features page to remove references to EBX and making any future changes. I limited the width of the page so there isn’t a huge gap on some pages when viewed in widescreen. And broke all the deep links, because .htm at the end of URLs is ugly.

Edit (June 20 2016): Added HTTPS support to the websites and added redirects for the old ztm.x10host.com/ta/*.htm deep links to new locations at turtlearena.com.

The domain name is going to change October 1 2012, the hosting provider is no longer allowing sub-domains of x10hosting.com. Probably moving to ztm.x10host.com, otherwise check http://turtlearena.googlecode.com if the website disappears. Might be a good time to get an actual domain name…

Testing WordPress, may switch from xhtml website (that I have to manually update rss feed…) and ‘development blog’ (which I post all news on now…) to using WordPress instead. Merging the two back together would be a good idea.

Fixed Turtle Arena website to be valid XHTML 1.0 strict, previously it was XHTML 1.0 transitional and some parts were invalid. (See index page validation.) Main change caused by this is the website no longer opens external-links/images in a new tab/window, but there was inconsistency with the opening external links anyway.

There is now javascript to create a popup of the image on the page, though images can still be opened in a new tab/windows by scroll clicking or using context menu.

Removed the hidden footer from all of the pages. (Still kept the footer on a separate page…) The footer was showing in w3m (a text web browser), which is main reason I removed it. The website does look rather nice in w3m though. 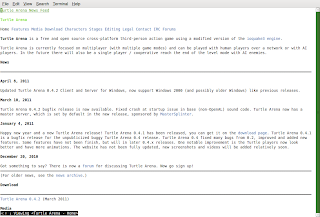 I moved the RSS feed icon from the top right corner of every page to just on the index page in the news box. I think it look nicer and is more logical.

Added the news posted on the Google Code project page (and later removed) to the news archive page.

Changed the logo at the top of each page to 50% of the previous size. It was larger than it needed to be.

::An introduction…
Welcome to ZTurtleMan’s World of Wonder, adventures in Turtle Arena and other things.

::Turtle Arena
Turtle Arena is a free and open source cross-platform third-person action game. It is inspired by the Ninja Turtles and various other video games.

::Long history… in short
Turtle Arena is not my first game project. The first began sometime around June 2006, upon finding a Sonic the Hedgehog fangame called Sonic Robo Blast 2 (SRB2). (SRB2 uses the Doom Engine created by id Software.) I really liked SRB2 and wished there was a Ninja Turtle game like it. I began learning everything about SRB2 and modifying it to be a Ninja Turtle fangame. Though I kept to myself and didn’t talk about what I was working on or release anything. My goal was to create the I would consider to be “the best” Ninja Turtle game. The game used graphics and music from official Ninja Turtle games along with some graphics I had created, but most data was from SRB2 (although some graphics were modified to be green). TMNTinSRB2 was far being in a complete game.

The SRB2 engine limited some of the things I wanted to do, so I looked for another engine to use. I found a few such as CrystalSpace and ioquake3 (based on quake3 by id Software) but was unable to compile or do anything with them. I began creating my own engine from scratch, Shell Engine. Shell Engine was designed to have the features I wanted but did not seem possible using SRB2’s engine. I added things like four player splitscreen, right from the start. After about 4 months I give ioquake3 another try as I was basically working to add features already present in ioquake3. It had been about 2 and a half years since I played SRB2 for the first time. I was able to compile ioquake3 and started reading the code, and just about everything I could find about quake3. Then I started making changes.

Turtle Arena is far more complete and playable than my two previous Ninja Turtle fangames. However, I still haven’t add all the features from them to Turtle Arena. Recently, four player splitscreen mode was added to Turtle Arena, which was the main feature that Shell Engine had that ioquake3 did not.

Got something to say? There is now a forum for discussing Turtle Arena. Now go sign up!